The Eagles have signed Defensive Lineman Jamarcus Henderson to the roster for 2022. We asked Head Coach and Defensive Coordinator Charlie Ovey for some comments about this signing:
”This offseason we were very thorough in looking for a DL import as we have had a great example modelled for our club the past four years. During my conversations with Jamarcus it was clear that he had the ability to play in the Maple League, but more importantly for us would be a high character player off the field and one that believed in the mission we are undertaking this season. I am really excited to see what Jamarcus can bring to the Eagles both as a player and in many other contexts.”

We asked Jamarcus some questions so that the fans of Kotka Eagles and jefu can get to know this new face a bit better before his arrival! Read below –

Welcome to the Kotka Eagles, Jamarcus! Tell us about yourself: 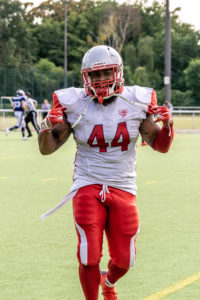 I’m from a small county in South Carolina, US. I’ve been playing football since I was a kid. In high school I made it a mission that I could play and dominate on the defensive line despite me not being 6’2 or 6’4, so from there on I’ve worked hard and showed up everyday and eventually became the team captain. I earned first team all area, all-region 3 years in a row and all-state 2 for two years. I won Defensive Player of the Year honors for the Upstate my senior year and broke the record for sacks and tackles for loss for my high school. After high school I was fortunate enough to go to Newberry college where I became a 3 time All-American. I was in the running for the Harlon Hill trophy, which is like the heisman for Division ll. I am top 20th in Division ll history for tackles for loss and tied for 33rd in history for sacks, which also led me to break my colleges record for sacks and tackles for loss. But I didn’t just try to make a statement on the field, I wanted to set a positive example off the field as well. During my senior year in college, I was voted as one of the leaders of the Grey Stripe which is where the previous leaders and coaches vote if they feel that someone is a great representation of the team and school. I was also very serious about my education. In college, I majored in Psychology with minors in Sociology and Criminal Justice which in fact during my career I made deans list.

After college, I was blessed to play football overseas and experience a new culture. Playing for the Cottbus Crayfish was very fun and just seeing how the Germans football culture was, was very intriguing. Last season we went to the championship, which brought more energy to the city because it had been eleven years since they went to a championship, so that was a great accomplishment. After the season, I was invited to play in the USA Vs European League of All Stars game which was a great experience for me.

What are your strengths as a player and what do you bring to the team?

My strengths are my mindset and competitive nature. Wanting the best for not just me, but the team as well which helps me to elevate my game to another level each year.

What made you choose Kotka Eagles?

I chose the Kotka Eagles because I felt like it was the right opportunity for me. This is their first year in the Maple League and I want to be a part of that and do anything I can to help progress the team. Also, I’ve never been to Finland and I thought it would be a good idea to experience another culture and learn about the history, language and the people. A lot of people where I’m from don’t know that there is football in other countries so I just want to make a path for others to show them that they can still continue their career in other ways and places.

What are your goals for the 2022 season?

My goals for the 2022 season is to bring more energy to the team and to Kotka in general. I want to do anything I can to make everybody else around me better. Reaching the playoffs and eventually winning the Maple Bowl is another goal of mine because it’s the Eagles first year in the Maple league so it may seem like the team is considered the underdog of the league. Outside of football, one of my goals is to master the skill of trading in the foreign exchange market so I can make money in minutes, wherever, whenever and help people be financially free.

What do you do outside of football?

Outside of football I like to work out, play basketball and trade Forex and Hfx

What can the Eagles fans expect from you? 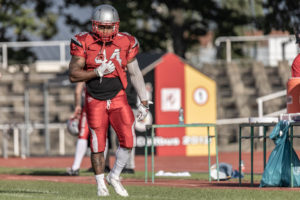 The eagles fans can expect a guy who will go hard every play and do whatever it takes to elevate his teammates. They can expect someone who is passionate about the game and is willing to help others not just on the team but in the city as well.

Fun Facts:
– My mother and father were very good at baseball and softball and i don’t like neither one
– I’ve been to Germany
– I can draw
– Everybody calls me J-money or money