1. What is the biggest difference between British and Finnish ’every day life’?

Charlie: Comparing my life to my life in London-everyday life here is much cleaner and calmer, and
generally more relaxed. The biggest difference is probably the number of people I see around-England is
very tightly populated compared to here!
Becky: For Charlie I don’t think much as changed – as he has a cup of Earl Grey a day no matter where
he is living – but for me I think it’s mostly to do with how spacious things are here and easy access to
open water or cottages. If I knew people at home who owned boats and had summer cabins I would be
from a very different social class! 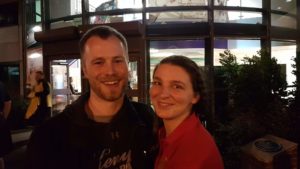 2. What do you think of Finnish sauna culture?
Charlie: I’m a big fan of Sauna culture, and as strange as it seems to an outsider, I like the beating with
branches too!
Becky: What’s there not to love about a room full of equally sweaty, naked people?! I really enjoy the
sauna culture, especially when you can go cool off (or turn into an icicle) in the lake afterwards.

3. Best and worst attributes as a player/coach?
Charlie: Best attribute: holding the same standard for all our players, regardless of tenure of experience.
Worst attribute: Getting lost staring into Haltia’s eyes during Indy and wasting time.
Becky: My worst attribute is getting lost in Tuomo’s ey– Not using my size and aggression more. My best
would be that I am always wanting to help and support my teammates on and off the field.

4. What do you do here in Kotka outside football?
Charlie: I really enjoy the nature in and around Kotka, and when I have time I’ll cycle about and enjoy the
scenery.
Becky: I work part time at a store in Porvoo, Jefu.fi – But I don’t know if that counts as being ”outside of
football”! I also work at the company’s sister-stores Cheer.fi and Tiimini.fi. Other than that, I’m a lineman

so I have obviously spent my time in Kotka figuring out the best places to eat.

5. What are your thoughts of Salmiakkikossu?
Charlie: Lauri Tihula and Anton Nurminen used trickery and low character to fool me into trying some. I
did not care for it.
Becky: I gave it a try, including the alcohol version, and I can safely say this is the one part of Finnish life
I have not, and will not, come to terms with.

6. What Finnish words do you already know?
Charlie: A few that shouldn’t be repeated in polite company.
Becky: The cheeky ones – for personal use
The food ones – I gotta eat
The football ones – I know left/right, run/pass, and our play calls in Finnish, though there are still a lot of
terms in English given that it’s a sport from America, so I am lucky with that!

7. Are there any differences between coaching your former Polish team and Eagles?(Charlie)
Charlie: There are several. In Poland I was very lucky to have an incredible DL coach, so I was happy to
simply stay out of his way and let him get on with it. Here I really enjoy getting to be more hands on with
the LBs and DL. Its given me a better appreciation for all the things they do on the line and how I can
help them succeed. In Poland I was able to work with the DBs every practice and really control a large
part of the coverages and techniques we used-here, because I spend more time with the DL and LBs, I
don’t have that same privilege, so it has been a fun challenge to try and ’steal’ time to work with each
position. And since here we have a DL import, vs Poland where our import was a safety, there are a lot
of things we do differently to cater to those different skill sets. We are able to be very creative with our
pressures and games on the line of scrimmage because Kaleb is very capable and works well with the
LBs, and maybe in coverage we do less ’exotic’ plays as we don’t have a guy as athletic as LaParish
Lewis. 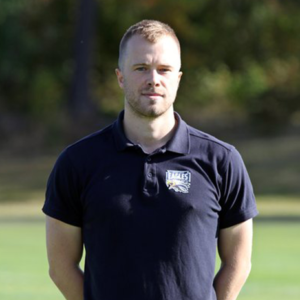 8. So you have played for the Eagles for just a handful of games and you already have ”hyperbeast”
moments. Tell us little more about that! (Becky)
Becky: Once Nesi recruited me over to the offence during pre-season, I made it pretty clear that I wanted
a passing touchdown on my stat sheet. Though I’ve played football before, this is my first ’season’ of 11s
and my first time playing receiver in this format. I’ve played a little in 5’s or 7’s in the UK but there is so
much more to read and react to in an 11s game! I’ve worn hyperbeast gloves since I’ve played DL
(waiting for my Nike endorsement any day now), and though I’ve been given some comments about
wearing them to play receiver I remained determined to get a TD with them – in all of their bulky, padded
glory – for all my lineman athletes out there! #TANCs 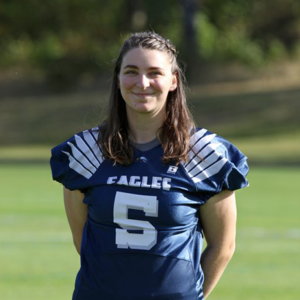 9. Has anything funny happened to you while living in Kotka?
Charlie: I think more of my funny import experiences happened in Poland than here. But in Kotka…
getting stranded at sea with Saku and Kaleb after the petrol on his boat ran out, and trying to convince
Kaleb to get out and ’push’ because that would be faster than Saku paddling us back to shore.
Becky: The only thing that makes this story ’funny’, is because to me it’s a resolution far different to one
that would’ve happened in the UK. I lost my purse in downtown and someone handed it to the police
station within the hour. Absolute madness! Or maybe they just noticed that it’s a Packers purse and knew
it wouldn’t be worth much.

10. What are your thoughts on Finnish food?
Charlie: I really enjoy Lonkero and makkarat. Much better than British sausages.
Becky: Hesburger gets a strong 10/10. I also really enjoy the ’grill culture’ in Finland.

11. Who is the biggest personality on Eagles roster?
Charlie: Has to be Watka Hyvarinen. No practice is complete without seeing a ball dropped and the
hyena cackle.
Becky: It’s a tough one – but Emilia Etholen makes me laugh at every practice. Whether she means to or
not, I don’t know….

12. What is the most Finnish thing you have done?
Charlie: I’ll defer to Olavi Koskinen to judge my pedigree on this.

13. If there would be a hollywood movie made from you, who would play you?

Charlie: Chris Hemsworth
Becky: I’m unsure if there’s anyone else out there who can balance the same fine line of ’out of shape
and eats too much but tries very hard’ that I do…. maybe Seth Rogen?

14. If you had to take one team mate with you to a desert island, who would it be and why?
Charlie: Waltteri Puustinen, so that I can continue to learn the philosophy of the ’Pude State of Mind’
Becky: I think I would take Minna Naukkarinen. I’ve seen her start up a wood sauna and from that I am
now convinced that she can help build an entire house.