This Saturday, after our U15 face the Tampere Saints at Karhulan Keskuskenttä, the Eagles men are kicking off against the the Kuopio Steelers at 16:30. In honour of Meripäivät, we have organised transportation to the game from Kotkansaari. The Skippy Tours bus leaves from the Kotka bus station at 15:20 and at 16:00 towards the Karhula central field. Return 5€ (cash payment).

The last time Eagles faced the Steelers in Kuopio, the final score was 54-6 in Kuopio’s favour, despite there still being many promising moments displayed by the Eagles squad. We asked Chris Forcier and Erkko Saarinen for some thoughts on the upcoming home field battle against the Steelers: 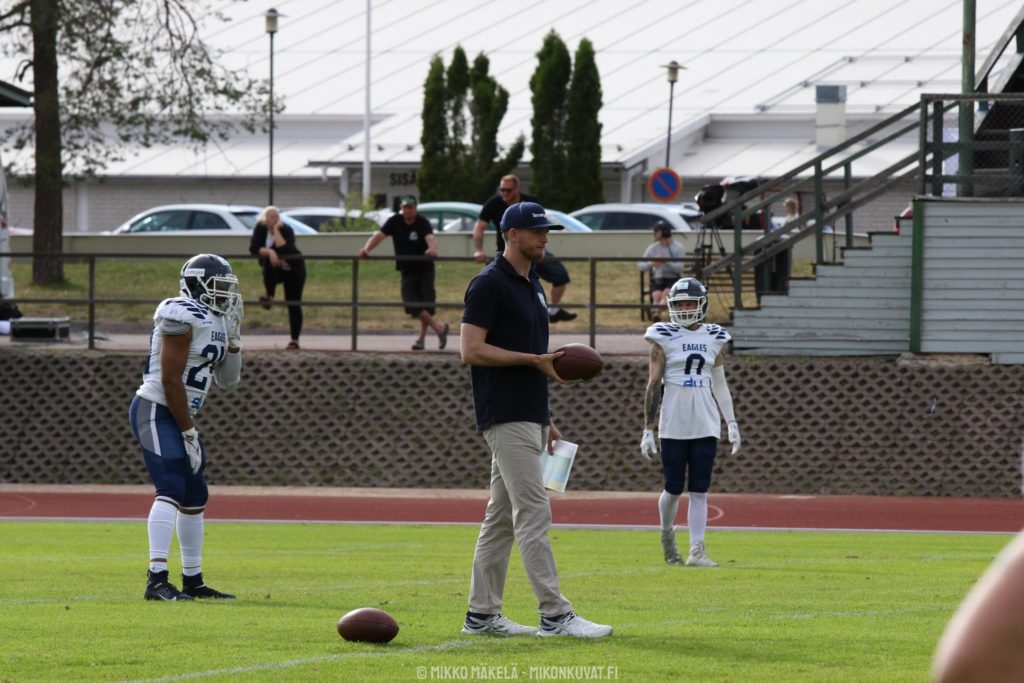 Q: This year you’ve seamlessly adapted your role from player to coach, how has this changed your experience of the Maple League compared to previous games and seasons?

A: My experience in the transition from player to full time coach this season has been a little bit different in the sense that I can solely focus on the X’s and O’s of the game. As a player, you have a distinct challenge and that is the physical aspect of the game. It can be difficult running around play after play getting guys in the right spots, managing the clock while trying to make magic happen. It’s a different type of pressure. At the Maple League level, its possible to be successful as a player/coach as I had done in the past, but it’s not easy because the competition truly calls for you too have another set of eyes too help dissect the opponent. When you are a player, you feel things a little differently rhythm wise being in the action. When you are a coach, you are a little more strategic and analytical. You have the chance to think ahead with your next move. Knowing your players abilities and situational awareness is critical. You don’t have the ball in your hands so you must know who to get the ball to when the game calls for it. Overall I can say the experience has been great. I have grown with the challenge, we’ve made big steps and I know the guys themselves have developed under the adversity and conditions of the season.

Q: What offensive players should the home crowd be looking out for at the game?

A: I think it’s no surprise to our Eagles fans right now that Peter Anderson is our most explosive player on Offense. He gives us a chance every play to see something special that not many guys out there can emulate. Look for Darrien Boone our QB to continue too build chemistry with Peter as they have only been working together for a few weeks now. Darrien is finally getting comfortable as he gives us a chance to sustain and finish drives which put points on the board. Other guys the home crowd should look for our offensive lineman unit. Veeti, Big-e, Kari, Joe, Mikko. They week in and week out have gone up against some tremendous defensive lines. They are getting better and don’t get enough credit as any successful play is a tribute too their work up front. Marnol Raudver our running back is another guy thats been challenged to rise up. He’s a young, strong back who has the opportunity to get great experience running the ball. I’m excited to see what he can produce moving forward.

Q: Do we have any notable changes to our offence since the last time the Eagles played the Steelers in Kuopio?

A: Not many changes Offensively since we last played Kuopio a couple weeks ago. The biggest thing was getting Darrien in here learning the base offense while building rhythm and chemistry with the guys available. We have built repetition with the core concepts in place as that is necessary to be efficient. There are a few wrinkles added of course due to opponents tendencies.

Q: What are your expectations for Saturday’s offence?

A: My expectations for the Offense Saturday are the same each week. The goal is to play fast, have a sense of urgency, be decisive in our blocking, running and routes. We must know the situation at all times in order to move the chains and score. We need to be efficient in taking care of the ball. No turnovers, no bad snaps, no penalties. Play with focus, next level effort to the whistle. Be fearless of our opponent. Most importantly, we have to gel together tighter when adversity comes. Never get too high or low and continue to sail the ship until the end. 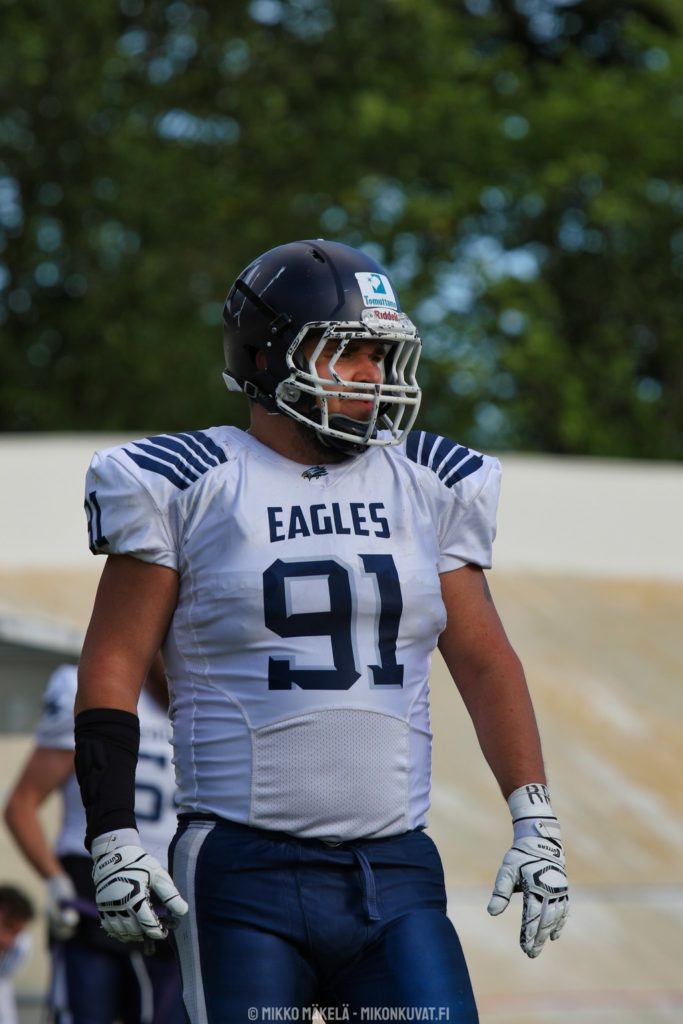 Q: How has the defence been preparing for the Steelers offensive threats?

A: The Steelers bring quite a lot of formations to the field with well executing personnell. Therefore we really have to study the film, understand our responsibilities on the field, and play without mistakes.

Q: What are the main differences you’ve found between playing in Division 1 and the Vaahteraliiga?

A: There is very little room for error. Teams are really committed to the sport which results in next level physique, speed and precision when compared to M1D.

Q: What are your goals as a player and a defence for Saturday?

A: This time of the season, enjoy the sport as much as possible without getting more injuries. Kuopio is a great opponent to play against so can’t wait! Welcome to Meripäivät!

Q: What defensive players should the home crowd be looking out for?

A: All eyes on Jamarcus, Roy and Veikko!

Come watch the game kick off at Karhulan Keskuskenttä klo 16:30! Buy your tickets via LIPPU.FI for 10€, or on the door for 15€. Children under the age of 15 and refugees are granted free entry to all of our home games. Savoury and sweet bites available at the cafe as well as great food from Pullukat Savustaa! The Bank also provides refreshments on the far side of the field – also with a great view of the game!

No Replies to "Otteluennakko – Eagles vs. Steelers 30.7"